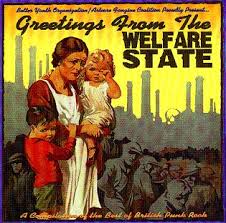 I live in an area of the UK which was one of the worst effected by the recession. In the North East, nearly 100,000 people are currently unemployed; many more are struggling to make ends meet on minimum wage.

So, whenever I’m feeling like life is an uphill struggle, I try to remind myself that I am still one of the luckiest people in the world. I’m lucky because I don’t have to worry about trying to cover the doctor’s bills if I need urgent medical attention. I’m lucky because I don’t have to lose sleep over the fact that I might starve to death if I lose my job. There are those who claim these things are a right, not a privilege, and I’m inclined to agree with them. But the fact is, in countries all over the world (such as India or even the USA), corporate greed makes these issues a serious problem for millions.

However, it seems conservative policies are now erasing every last scrap of state protection for the poor. Recent changes to the NHS include an increased role for private companies and Clinical Commissioning Groups. The move has led many to argue that the NHS is being transformed into little more than a brand name, which will commission a range of competing service providers to offer healthcare solely for profit. One can only speculate grimly on where the money will come from if the government is to remove some, or all, of its funding to this new ‘brand’; something which, granted recent cuts to public services, doesn’t seem entirely out of the question.

Meanwhile, tens of thousands of people have been pushed into work placement schemes which critics have denounced as ‘slave labour’.  Threatening to cut Job Seekers Allowance unless the unemployed work full-time for their benefits, the government has also allowed incredibly wealthy companies (such as Tesco) to save a huge amount of money by not paying wages.

I narrowly avoided one of these work placement schemes myself last year. Luckily, I was offered a job a few days before I was due to start. I received around £55 pounds JSA at the time, which would have put me on about £1.57 an hour working at Tesco. Despite already having plenty of retail experience and only being out of work for around 4 weeks, I was told that this was still mandatory. 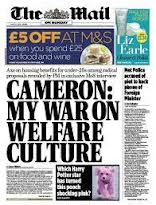 But by far the most worrying threat to the future of welfare in this country is not the coalition’s selfish and undignified tactics: it’s the fact that working people actually agree with them. In response to the recession and frequent sensationalist news stories, welfare has become a dirty word to many. I meet workers of all types – from taxi drivers to office clerks – talking about those on benefits as if they are thieves of public resources. The average Daily Mail reader appears adamant that the solution to the economic crisis is to ‘stop them parasites stealing our wages’. Their argument is that benefits are (in fact very rarely) higher than wages, so we should lower all benefits; the fact that the government has allowed corporations to offer us pittance for wages never seems to factor into the equation.

Putting the issue of propaganda to one side, the main problem is that they are unaware of how horrible and uncertain life was for ordinary people in Britain before the NHS and the Welfare State. The original socialist visionaries who implemented them have long since passed away and the message they left behind was covered over with clippings of tits from an old page three.

I’ve been reading The Ragged Trousered Philanthropist by Robert Tressell, a novel written at the turn of the 20th Century. It follows a group of painter decorators who, when there is plenty of work, have just enough money to get by. However, as the depression sinks in and workers are forced into redundancy, we see first hand what happens when there is nothing in place to help.

I would recommend TRTP to anyone who believes the solution to the recession is to reduce welfare. It finely illustrates the squalor and poverty which will be unleashed on our countries hard-working citizens if a sudden change in circumstance leaves them without work.

Nowhere is this better captured than when the hero of the novel, Frank Owen, develops tuberculosis. Despite looking every day, Owen is out of work, starving and unable to afford any doctor’s bills. If he dies, he knows his wife and son will be forced into a miserable life in the workhouse. The most troubling part about this is that we almost agree with him when he contemplates killing his family before committing suicide. It seems reasonable that ‘if he could not give them happiness, he could at least put them out of further suffering’ (TRTP, p. 415).

Later, we find Owen desperately leafing through a second-hand book called Consumption: Its Causes and Its Cure. Although he doesn’t have enough money to buy it, he opens it up and notices many of the remedies are expensive foods and drinks. Capturing the bitter irony of the situation, Tressel explains how ‘as far as the majority of those who suffer from consumption are concerned, the good doctor might just as well have prescribed a trip to the moon’ (TRTP, p.431). We can see clearly what happens when medical care is privatised: the poor are left with no option but to die quietly. 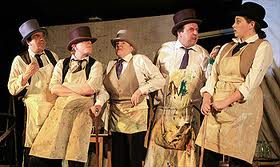 And we can learn so much from this book because it isn’t some tall tale invented by a rich novelist; it is an honest account of what life was really like at the time. Tressel (real name Robert Noonan) was himself a skilled sign painter working in Hastings during the recession of the early 1900’s. When work ran out, he and his daughter lived hand to mouth and struggled to survive. In the end, Noonan died of tuberculosis in 1911 whilst trying to find work in Liverpool.

Noonan never lived to see the incredible effect that his book had on the UK. However, as it grew in popularity throughout the 20’s and 30’s, it was read by figures such as George Orwell and Jack Jones and became a major influence on the worker’s rights movement (TRTP p. Xxvi). And it was of course the trade unions demand for worker’s rights which brought about the Labour government of 1945 and, in effect, the Welfare State we know today.

Until you look at the problems which brought it into existence, it can be really hard to get your head around what welfare is all about. British people had just survived a Second World War; they had been living in fear of total annihilation. Now that peace was declared, they decided it was time to build a better society. They no longer wanted to live in a world where corporate greed and inequality was causing tens of thousands to die from want.

William Beveridge had outlined a plan which aimed to take a small portion of everyone’s wages to tackle what he called the “Giant Evils” in society: squalor, ignorance, want, idleness and disease. People wanted to be able to ensure that every citizen was treated with a degree of dignity and respect and Beveridge’s report offered a very practical method by which they could achieve this.

And let’s not forget a vote for Labour in 1945 wasn’t a vote for the sycophantic, private school moderates they are today. The party was made up of, and answered directly back to, trade unions. It was in Labour’s interests to be committed to Beveridge’s ideas because they were the voice of the poor. So they immediately went about creating our National Insurance policy and our NHS, thus vastly reducing the ‘Giant Evils’ Beveridge had identified. 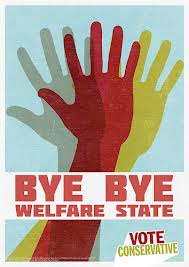 However, it seems as if now- in the 21st century, the pendulum has swung nearly all the way back. As well as destroying welfare, conservative policies are increasingly leaving the poor at the mercy of private companies interested only in profit. An illuminating example of this is the idea, supported by Academics in the London School of Economics, that the NHS needs some ‘healthy competition’ to increase its performance. Reformers seem to be consistently blind to the fact that we’ve been here before. This ‘healthy competition’ is one of the very ills the NHS was created to solve. For when companies compete with each other for profit, the customers and workers are always the ones who bear the punishment; cut corners and botched jobs become the norm, people’s lives are put at risk and the poor are faced with a life of turmoil and despair (something made very clear in TRTP).

Furthermore, the work placement schemes mentioned above (along with reductions in benefits like ‘the Bedroom Tax’) bare a frightening resemblance to the work house ethic Frank Owen is so afraid of. Both are based on a misguided belief: that poor people out of work are generally lazy and that by making relief as degrading and harsh as possible they will be forced back into work.

Both the workhouse owners of old and the coalition government blindly ignore the fact that the cause of unemployment is not laziness but inequality. People in need of benefits are not spongers but victims of a corporate system, one which exploits some and leaves the rest for dead. Most of the unemployed in this country are simply looking for work in the middle of a global recession. Yes, a small minority find it more profitable to claim benefits; however, the solution to this is to force companies into raising their wages in line with inflation, not to reduce the bare minimum the state calculates for you live on. Sadly, I fear this hypocritical defense of the rich and demonization of the poor will continue long after the coalition government.

To those working people who welcome these attacks on the most vulnerable in society, I hope you will enjoy your success. I also hope you never fall victim to the greedy, selfish policies that are bringing them about. Because you can certainly count on one thing from now on: when you need help the most, the government will no longer be there to provide it.

6 thoughts on “Welfare is a Dirty Word: How People Turned Against the Welfare State”